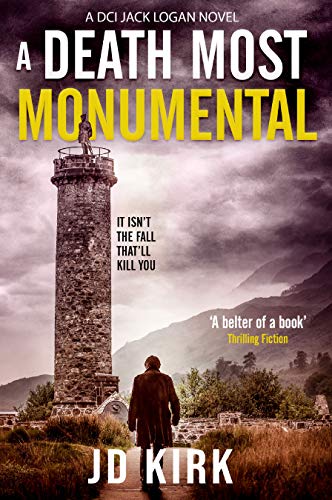 We all have our little secrets.

When the remains of a brutally murdered young woman are left hanging from the Glenfinnan Monument in the Highlands of Scotland, DCI Jack Logan and his Major Investigations Team are dispatched to investigate.

At first, the case appears to be fairly open and shut. But, as evidence mounts, Jack uncovers some shocking truths about the victim that risk turning the investigation into a potentially explosive international incident.

With a billionaire baying for his blood, a former FBI agent breathing down his neck, and half the world’s press watching his every move, it isn’t the murderer that Jack’s afraid might be the end of him.

And don’t get him started on the bloody tourists…

A Death Most Monumental is the eighth book from internationally bestselling author, JD Kirk, and is perfect for fans of Stuart Macbride, Ian Rankin, Chris Brookmyre, and Val McDermid.